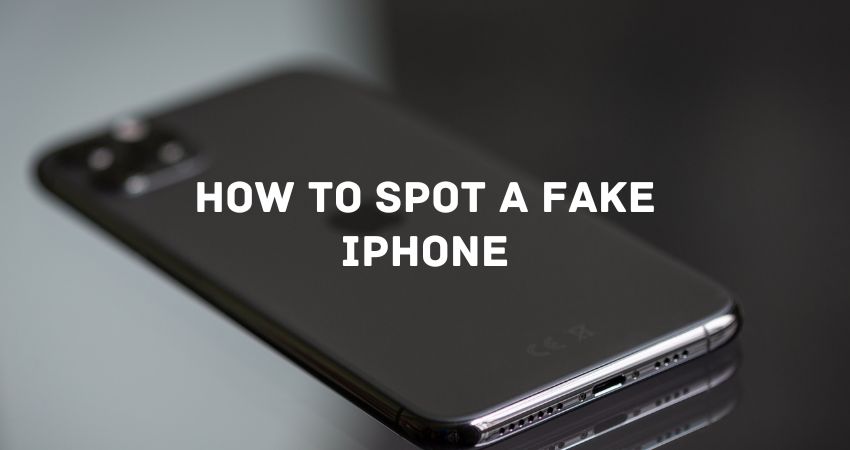 How to Spot A Fake iPhone

By examining an iPhone’s physical features, software anomalies, and other details, you may quickly identify a fake. A genuine iPhone will seem significantly different from a copy one in terms of its packaging, Apple branding, charging port, and camera design.

I recently intended to buy a used iPhone 13 from a seller. I instantly declined him after determining that the phone was a fake after closely examining its physical features. Here are a few easy and fast ways to spot fake iPhones.

In terms of design, the original iPhone package is simple and tiny. Despite their best efforts, fake iPhone makers often use subpar materials for their products’ packaging. A close look at the package will reveal unfamiliar characters even if it isn’t. This is a blatant indication.

Be on the watch for a missing Apple logo on the box as well. If the box’s color scheme differs significantly from that of the original iPhone, that should serve as strong evidence of a fake.

So it’s no surprise that Apple’s logo appears on every product they make, even their smartphones. On the other hand, iPhone clone producers are growing more and better at replicating this iconic emblem. To tell the difference between a genuine iPhone and a fraudulent one, hold the phone up to bright light. A mirror finish indicates that you have a counterfeit iPhone.

The texture of the logo can also be felt by simply running your touch over it. Fake iPhones have a distinct textural difference between the rear of the phone and the branding.

As an added warning sign, an iPhone with an unappealingly sunken logo is most likely to be a fake.

If you want to determine the difference between a genuine iPhone and a fake, look for this feature. PentaLobe screws are included in the original packaging of every iPhone (they look like stars with 5 points). When the regular cross screws are used instead, you know your said iPhone is a fake.

The charging port is next on the list. Fake charging ports are no longer required by the majority of counterfeit iPhone manufacturers. However, if you look at the port’s border, you can tell the difference between a real iPhone and a fake one. Fake iPhones will have a plastic or engraved border to mimic Apple’s real-life models.

Some fake iPhones are so well-made that it’s difficult to tell the difference between a genuine and a counterfeit. However, if you feel around your phone and discover that some buttons aren’t where they should be, the iPhone is a fake.
One good example of this is the “sleep/wake” button, which is often located in the upper right hand corner of an iPhone. The iPhone is a fake if the logo is not in the bottom right corner where it should be.

Even from a distance, you can differentiate an original iPhone camera from a copy. Because dishonest phone makers attempt to imitate this but are unable to do so well, you will be able to determine whether or not your phone is a fake by examining the camera construction. Fake phones typically have a shorter height than their genuine versions.

If your iPhone has passed all of the tests that were mentioned above, but you are still confused about whether it is a real or fake one, then it is necessary to turn the device on and see how it performs.

One of the reasons that iPhones are in such high demand is because of the incredible software that they come equipped with. In most cases, the Apple logo serves as the key to unlocking the door that leads to the magical realm. Therefore, if you turn on your gadget and it displays anything other than the Apple logo, it is most likely a fake iPhone.

The IMEI and serial number of an iPhone are often printed on the reverse side of the tray that holds the SIM card. Before the release of the iPhone 6s, earlier models of the iPhone had the information written on the back of the device. Because it is simple enough for producers of knockoff iPhones to copy, this is not often a reliable way to spot a fake. If you go to Settings > General > About on your phone, you should be able to see your IMEI number there. This number should be identical to the one that is displayed on the back of the phone. In such a case, you’re looking at a fake iPhone.
The backs of newer models do not have the serial numbers that were formerly printed there. Checking an Apple device’s IMEI may be done on the company’s website.

In addition to the fact that the cameras on Apple iPhones are of the highest possible quality, the app gives you access to a wide variety of tools that can be used to control the cameras on those devices. When you launch the camera app on your iPhone, the resulting image that is captured by the lenses should be sharp and unmistakably defined. Images on fake iPhones will be extremely fuzzy and difficult to make out clearly.

It is a well known fact that Apple has its own iPhone Store, in which the company publishes both its own apps and those of third parties that have been pre-screened and authorized. If you click the Apple Store icon on your phone and it does not open, this should serve as a significant warning sign that the phone you are using is not genuine.

Apple’s iPhones are well-known for the high-quality of its hardware, particularly the screens. The display of a brand-new iPhone, unless it has a cracked screen, will be vivid, and the colors will jump off the screen. If, on the other hand, the colors look washed out or as though they have been watered down, then you are looking at a counterfeit iPhone.

Apple was one of the first companies to manufacture electronic gadgets and add facial recognition in their products. Even though it is only available as an option, the feature is functional if you want to use it. You should be able to spot a fake iPhone right immediately because the majority of them have a Face ID setting that is either false or does not work properly.
To determine whether or not the Face ID feature on your phone is active:

Other Methods To Determine

There is a valid explanation for why iPhones are so pricey: it does not come cheap to pack all of those high-quality goods into a single device.
It seems to be the reason that you ought to be able to get an original iPhone at a price that is roughly comparable to the suggested price of a standard iPhone, if not a little bit lower. However, if you’re being given pricing that is absurdly cheap, you might want to reconsider. That is not an Apple-approved iPhone.

You may use the official Apple website to find the location of the Apple retailer that is closest to you so that they can do a diagnostic check on your device. If your phone passes all of the tests mentioned above, then there is a good chance that it will also pass the diagnosing test. In that case, you should consider yourself unlucky because you were duped into purchasing a counterfeit iPhone.

When you are aware of what to look for, it is not difficult to identify fake iPhones. You will be able to accomplish so with the aid of the guidance that was just presented to you. Additionally, it is highly recommended that you acquire your iPhones exclusively from authorized iPhone service centers whenever this is available. Do not let yourself be tricked into buying a knockoff iPhone.